Sept. 1 - 14 | Explore some of Europe’s most captivating cities on this exciting twelve-night cruise aboard Oceania Cruises’ Riviera. Embark on your journey in Athens, a historic city of ruins and relics, and set sail for Mytilene. 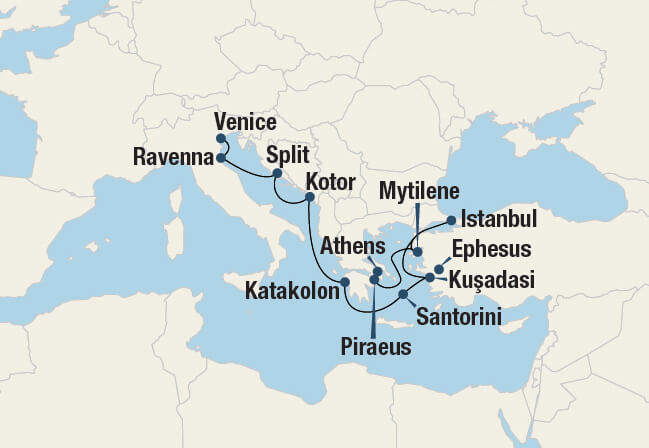 Take in the belle époque churches and Turkish mansions of this “Garden of the Aegean.” Spend two days in Istanbul, a cosmopolitan city astride two continents. Experience the incredible Blue Mosque, the Topkapi Palace, and the Grand Bazaar. Next, head to Kuşadasi, a resort town that boasts stunning beaches and acts as your jumping-off point to explore the legendary ruins of the city of Ephesus. In Santorini, see beautiful black sand beaches and chalk-colored homes clinging to stony cliffs along the caldera. Then stop in Katakolon to relax at a seaside restaurant or head inland to discover one of Greece’s most celebrated landmarks - ancient Olympia. Cruise the Adriatic Sea to Kotor, a UNESCO-listed walled city nestled beneath the limestone cliffs of Mt. Lovćen. Discover Split, a spectacular Croatian city built up around the Roman palace of Diocletian in the fourth century. Your journey will end with a day exploring the timeless canals and charming shops of Venice, but first, stop in Ravenna, an off-the-beaten-bath treasure filled with Byzantine charm. Explore the city’s eight UNESCO-listed churches and mausoleums adorned with early Christian mosaics and frescoes.

Pricing starts at $4,599 including airfare.