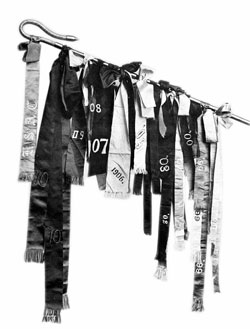 Shepherd's Crook
The shepherd's crook was passed on each spring from the senior class president to the president of the junior class. The crook featured the class colors of retiring owners and of preceding classes. If the class permitted the crook to be stolen or refused to accept the responsibility of it, black ribbons with the numerals of that class were affixed on the crook. The shepherd's crook was used to symbolize the seniors as shepherds and the underclassmen as the flock. The tradition was introduced in the form of a spade in 1892 by George Clothier.

Flash Card Sections
More than 40 years ago, members of the K-Block student section used flash cards to increase student participation at home football games. The K-Block, or flash card section, began in 1957 in East Memorial Stadium. Flash card sections were seen prior to this in the 1920s. K-Block members would wait for the announcement of a number from the yell leader. Then each member would hold up a colored, numbered card. In 1958, the section had 1,200 participants. The designs they created could be seen from the field or the opposite side of the stadium.

Spring Fling
For more decades than people can remember, K-State residence halls have sponsored their annual Spring Fling in April. In past years, events have included bed races, teeter totter marathons, even bath tub stuffing contests. The one event that has continued its popularity throughout the years is the bed races.

As late as the 1940s, freshmen were required to wear beanie caps under the threat of getting paddled by varsity athletes. The beanie tradition started at K-State around 1912.

Favorite Man on Campus
From 1946 to 1972, K-State women voted for their Favorite Man on Campus. Candidates would campaign for weeks to try to earn the title. John Aiken '49 of FarmHouse fraternity was crowned the first FMOC at the annual Snow Ball dance establishing the tradition.

Bluemont Bell
Older than all the buildings on K-State's campus, the Bluemont Bell, the original school bell for Bluemont Central College, rests in the quadrangle west of Bluemont Hall. It was donated to K-State in 1861.

K-Hill
The 80-foot-tall KS letters overlooking Manhattan became a historic landmark in 1921 when the letter "K" was constructed at a cost of $350. The "S" wasn't added until 1930 by the Sigma Tau honorary. The letters are located next to the Kansas River bridge.

Higinbotham Gate
In 1989, the Higinbotham Gate was added to K-State's historic limestone wall southeast corner by Aggieville. Masons set back the wall from the intersection to create a plaza and stone signage to mark the university campus.

Memorial Stadium
Memorial Stadium, which sits on the southwest corner of campus behind the K-State Alumni Center, was completed in 1924. It serves as a memorial to K-State students and graduates who died during World War I. Primarily, it was used as the football stadium until 1968. From 1946 into the 1960s, K-State housed men and women in the east and west Memorial Stadium dormitories. Since then, it has served as classroom and office space, a location for club sports, Homecoming pep rallies and many other activities. Memorial Stadium now houses the Purple Masque Theatre in West Stadium and the Berney Family Welcome Center in East Stadium. 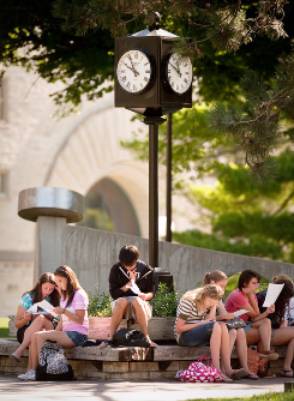 Campus Clock
The clock that stands north of Holtz Hall was provided by donations from the classes of 1968, 1971, 1973 and 1974. Each face of the four-sided clock is inscribed with one of these class years.

Aggieville
The popular shopping and eating area that serves K-State students has been part of the K-State tradition since 1889. The first Aggieville business was a laundry service that later expanded to include school supplies and a barber.

Sidewalks and Pavers
K-State alumni and friends have many opportunities to leave their mark on a spot they love full well. Pavers can be personalized for installation on the K-State Alumni Center’s Johnson Terrace near the Wildcat statue. Additionally, the Senior Sidewalk, located on 17th Street immediately east of Memorial Stadium, features personalized stones; the first year students had the opportunity to make a donation and in return be honored with a stone in the sidewalk was 2000. K-State fans also can see their names and messages on a Legacy Brick in the West Stadium Center Plaza at Bill Snyder Family Stadium.

K-State Alumni Center’s Wildcat statue and KSU Obelisk
Salina artist Richard “Dick” Bergen ’63 and son Rich Bergen ’86, ’98 created the 7-foot bronze Wildcat statue overlooking the Alumni Center's Johnson Terrace. Funding for the iconic statue was provided by Jack and Donna Vanier, Manhattan, Kansas. The statue was unveiled Nov. 1, 2003, and has since been the backdrop of many family, friend and graduation photos. The father-son artistic team also designed the KSU Obelisk, located at the east entry of the Alumni Center. The obelisk, which was dedicated Sept. 20, 2014, is an 18-foot, limestone and stainless steel sculpture that features the K-S-U letters and two bronze plaques depicting the words of both the K-State Fight Song and K-State’s alma mater. Two sides of the monument are adorned with Wildcat paw prints in recognition of the university’s mascot. The obelisk was made possible through a gift from Dan ’71, ’75, ’87 and Cheryl ’72, ’79 Yunk, Manhattan, Kansas, and was constructed and installed by Compton Construction Company in Wichita, Kansas, owned by Gib ’80 and Brenda ’77 Compton.

Open House
The biggest annual event staged at K-State is the All-University Open House, held each spring. This event traces its origin to several smaller, well-organized college events. Some of these former events, like Home Economics Hospitality Day, Engineers' Open House and Ag Day, were going strong for nearly a half century before all the colleges began coordinating Open House together in 1969. Former U.S. Sen. Bob Dole spoke at the inaugural All-University Open House.

Willie the Wildcat
The Willie tradition began in 1947, and since then, his image and role have undergone several changes. Adrea Simmons Andersen '55 played K-State's first mascot at the September 1947 football game against Oklahoma A&M. She dressed in a red-brown wildcat costume with black stripes and a tail. 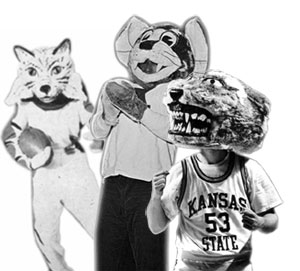 Several decades before this, beginning as early as 1922, a real wildcat named Touchdown supplied the mascot symbolism at games. And, from 1906 to 1909, Boscoe, a black Labrador, represented K-State at baseball and football games.

In 1993, the Kaw Valley Catbacker Club donated the fifth Willie head. The new head was rounder and made out of artificial fur. Willie received a face-lift again in fall 1997.

This Willie head, still used today, has gray fur with two white stripes to resemble the Powercat logo. The current head weighs 5 pounds. For more than 50 years, one tradition with Willie has remained the same: the identity of Willie is still kept a secret.

Powercat Logo
The Powercat logo was introduced to K-State in 1989 by football coach Bill Snyder, who wanted a new logo for K-State's football team. Tom Bookwalter, a native of Summerfield, Kansas, created the new contemporary logo. The athletic department transferred the rights of the Powercat to the university. A total of 39 schools in 18 states now use the Powercat as their athletic logo.

Wildcat Warm-Up
Wildcat Warm-Up is sponsored each year to welcome students to campus and get them excited about K-State. At this event, new K-State students join Willie, the marching band and cheerleaders to learn K-State cheers and traditions, including the fight song and the "Wabash Cannonball." The first Wildcat Warm-Up was in August 1999.

Call Hall
One of the most popular sites on the K-State campus is the dairy bar at Call Hall. The Call Hall ice cream counter serves more than 35 flavors, Monday through Friday. It also is served in the Student Union, dining halls and at special campus events. 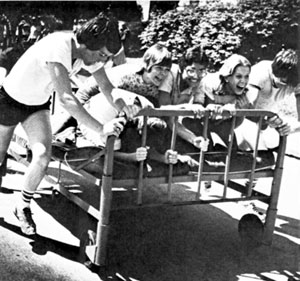 Class Rings
The official K-State ring tradition began in fall of 2001. The class ring is a symbol of what students have accomplished and will achieve in the future. The ring tells the story of K-State and connects students and alumni. Students who purchase rings receive them at a special presentation event in the spring.

Nicknames
K-Staters were once referred to as the Aggies. In 1915, Coach Chief Bender coined the nickname "Wildcats" for the football team because of the squad's fighting spirit.

School Colors
The official school color is Royal Purple. It was chosen in 1896 by two representatives from each class, but it wasn't approved by the faculty until 1921. Through the years, white, silver and, most recently, black have been used along with purple as complementary colors.

K-State Sesquicentennial
Amy Button Renz '76, '86, president and CEO of the K-State Alumni Association, presented on K-State Traditions as part of the K-State 150th Brown Bag Lunch and Lecture series. If you missed the presentation, you can view the video here. Learn more about K-State's 150th celebration at www.k-state.edu/150.

I know a spot that I love full well,
'Tis not in forest nor yet in dell;
Ever it holds me with magic spell,
I think of thee, Alma Mater.

The alma mater was selected as a result of a campus contest in 1903 and was written by Humphrey W. Jones, class of 1888. His original work was three stanzas plus the chorus. His version was later altered by changing the words from KSAC to KSU.

Fight, you K-State Wildcats
For Alma Mater Fight-Fight-Fight!
Glory in the combat
For the purple and the white,

Faithful to our colors,
We will ever be,
Fighting ever fighting for a
Wildcat Victory!
Go State!

The Fight Song, "Wildcat Victory," was written in 1927 by Harry E. Erickson '27. John Philip Sousa dedicated "Kansas Wildcats," the K-State march in 1931. The K-State Alumni Association celebrated the 90th anniversary of the song in 2017.