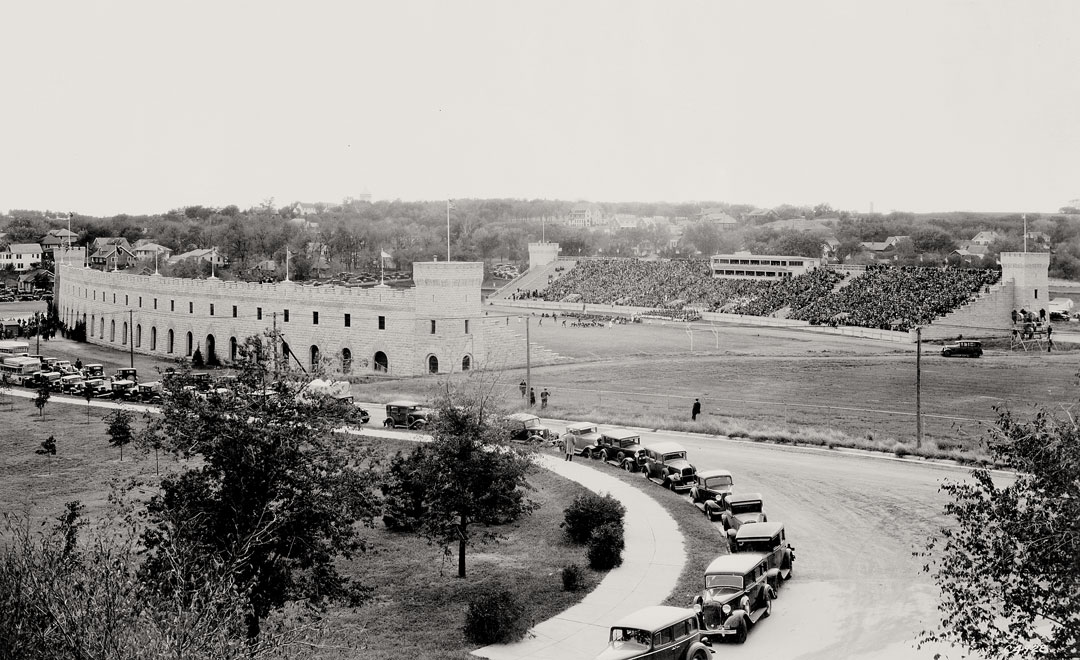 The history of World War I Memorial Stadium
“A story that needed 100 years to tell ...”

The story of Kansas State University’s World War I Memorial Stadium begins in 1917, the year the United States entered World War I. During the conflict, 48 K-Staters gave their lives in service to their country. Their friends and family back home wanted to find a way to commemorate their sacrifice. K-State’s need for stadium facilities and the desire to build a memorial merged to create the concept for WWI Memorial Stadium.

Construction began in 1922; the west wing was completed soon after, followed by the east wing in 1924. Walls were added to East Stadium in 1928 to enclose a space for locker rooms, and walls enclosing West Stadium were completed in 1938 as part of a Depression-era Works Progress Administration (WPA) project. However, work on the stadium was never fully completed, based on the original designs, and the structure was never formally dedicated.

K-Staters cheered on the Wildcat football team at this stadium until games were moved to what was then known as KSU Stadium in 1967. Although the structure could not be torn down due to its status as a memorial, the future of the stadium remained unclear.

Then, in 2002, the construction of the K-State Alumni Association Alumni Center completed the horseshoe shape originally planned for Memorial Stadium and brought new life to the stadium complex. Today, the stadium is used for marching band practice and numerous club sports. West Stadium is home to the Purple Masque Theatre, and East Stadium now houses the Berney Family Welcome Center.

On April 21, 2017, World War I Memorial Stadium was formally dedicated with new signage commemorating its status as a memorial to K-State’s 48 fallen, preserving this history for many generations to come.