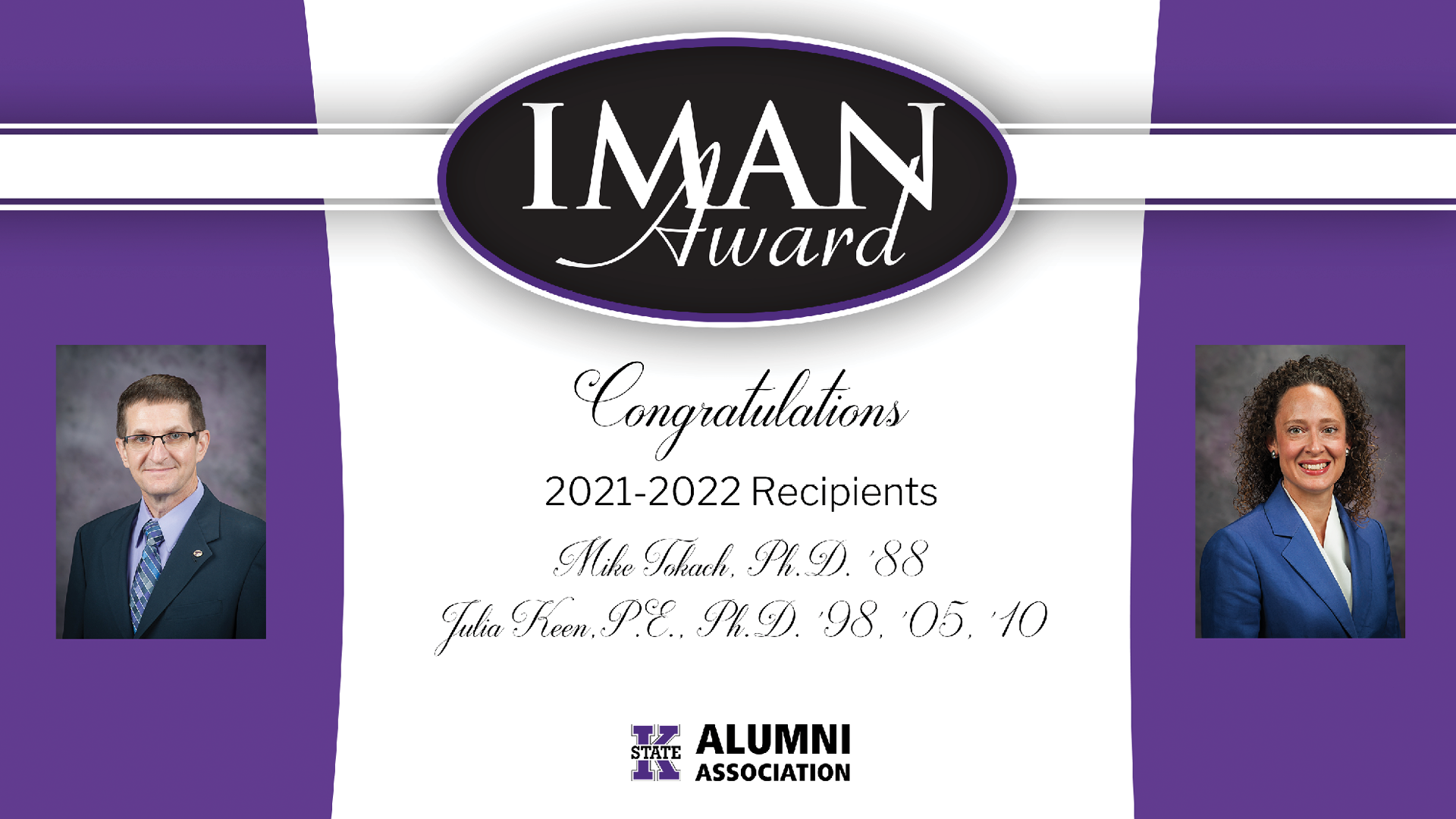 Two Kansas State University faculty members, one from the College of Agriculture and one from the Carl R. Ice College of Engineering, will each receive a $5,000 award in recognition of their outstanding research and teaching during a 4 p.m. ceremony Sept. 30 at the K-State Alumni Center.

Introduced in 2007, the annual Dr. Ron and Rae Iman Outstanding Faculty Awards are sponsored by the K-State Alumni Association and are made possible through the generosity of Ron and Rae Iman.

Julia Keen, P.E., Ph.D., professor in the GE Johnson Department of Architectural Engineering and Construction Science in the Carl R. Ice College of Engineering, will receive the Iman Outstanding Faculty Award for Teaching. The recipient of the Iman Outstanding Faculty Award for Research is Mike Tokach, Ph.D., university distinguished professor of animal science and industry in the College of Agriculture.

Keen’s award honors a full-time K-State faculty member for excellence in high-quality instruction, strong relationships with students inside and outside the classroom and a reputation for scholarship and distinguished service to the university.

Keen is a licensed Mechanical Professional Engineer in Kansas and Iowa, and holds the High-Performance Building Design Professional (HBDP) ASHRAE Certification. As a professor of architectural engineering and construction science, she was granted the Bob and Betty Tointon Engineering Endowed Chair and was recognized as the 2020 Coffman University Distinguished Teaching Scholar. She also received the 2018 American Society of Heating, Refrigerating, and Air-Conditioning Engineers E.K. Campbell Teaching Award, among many other accolades. Additionally, Keen served as the team lead for K-State’s COVID Classroom Ventilation Analysis; president of K-State’s Faculty Senate from 2013-14; has employed one to four undergraduate researchers during each of the past six years; served as major professor to 15 graduate students; all while maintaining a class load of three to five classes per semester.

In support of her nomination, Matt O’Keefe, dean of the college and LeRoy C. and Aileen H. Paslay Chair, said, “As COVID-19 appeared and evolved, Dr. Keen refocused her Coffman Chair research project to look at and assess university educational spaces, which included the status of current ventilation and needs for improvements. She and her team of students conducted this assessment across the three K-State campuses involving more than 70 buildings and 400 rooms – a tremendous undertaking. These efforts over the past year have been instrumental in ensuring safe teaching and learning environments for our faculty and students, as well as identifying ways to improve student learning.”

Tokach’s award recognizes faculty members who have distinguished themselves in their chosen profession and who have contributed significantly through research to improve the betterment of the educational experience, or whose research has had a significant impact on their area of study.

Tokach focuses on transferring information to swine producers, conducting practical nutrition research, and serves as a member of a highly productive Applied Swine Nutrition Team. He and his colleagues have generated more than $21 million in grants and gifts to K-State to support swine research. He also was named one of the 50 people that have made the greatest impact on the swine industry in the last 50 years by the National Hog Farmer magazine.

His nominator, Ernie Minton, dean of the college and director of K-State Research and Extension, said, “Mike Tokach is one of the outstanding swine nutritionists in the world. His research program is among the best examples of basic research that is rapidly translated into impactful application. This relationship between research and application is at the heart of the land grant-university mission.”

“The hard work, dedication and accomplishments of Dr. Keen and Dr. Tokach have enhanced K-State’s reputation across the nation and beyond as a major research institution,” said Amy Button Renz, president and CEO of the K-State Alumni Association. “They are great examples of the positive impact faculty have on both the university and society as a whole.”

The Imans live in Albuquerque, New Mexico. Ron and Rae are life members of the K-State Alumni Association and served as Kansas State University Foundation trustees. Ron Iman earned three degrees from K-State: a bachelor’s degree in math education in 1962, a master’s degree in 1970 and a doctorate in statistics in 1973. He is a past member of the Association’s board of directors, served as the Association’s representative to the KSU Research Foundation board and is a past chair of the Arts and Sciences Advisory Council. He received the university’s Arts and Sciences Distinguished Service Award in 1996 and, in 1994, served as national president of the American Statistical Association. Ron Iman was named a Highly Cited Researcher by the Institute for Scientific Information in 2004.

For more information on the Iman Awards, visit k-state.com/Iman.