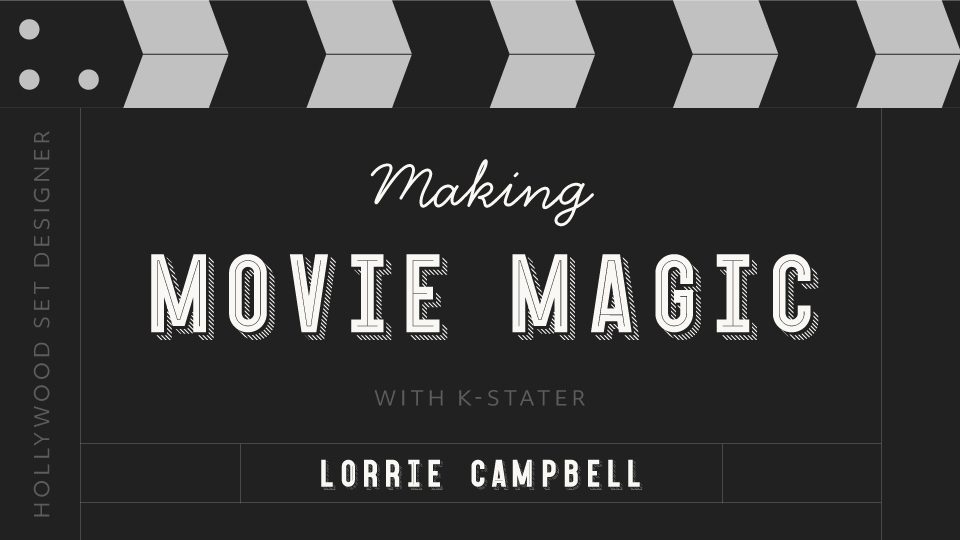 For Lorrie Campbell ’87, movies are magical.

Campbell, who lives in New Mexico, has worked on movies and television shows as a set designer for nearly 30 years.

“The art of it, to me, is still so incredible,” Campbell said. “The creation of that story, that world, out of somebody’s brain, onto paper, and then becoming a 3D reality, is an alchemy. It’s amazing that so many of them work and you do get that magic.”

Campbell grew up in Great Bend, Kansas, and graduated from Kansas State University with a degree in interior architecture. She also has a master’s degree from the University of Missouri-Kansas City in scene design for theater.

While she was living in Kansas City after college, a film came to town, and she got hired as a buyer. Her first experience in film was working on HBO show Truman, about former President Harry S. Truman.

Campbell lived in Los Angeles for more than 20 years. She’s worked on a variety of movies and shows, including The Harder They Fall; The Little Things; Little Women; True Detective; Yellowstone; A Wrinkle in Time; Jurassic World; Horrible Bosses II; Saving Mr. Banks; The Girl with the Dragon Tattoo; The Hangover Part II; The Curious Case of Benjamin Button; Frost/Nixon; The Book of Eli; Dinner for Schmucks; and Daredevil, among others.

Campbell said she still loves to watch movies. The first movie she saw in the theater in two years, after the COVID-19 pandemic, was the science fiction film Dune.

“I was so impressed with how great it looked,” she said. “You want to see that on a big screen – I wouldn’t want to watch that on an iPad.”

Campbell said she shied away from theater in high school, mainly because she did not want to act. But back then, she didn’t know of all the behind-the-scenes folks that it takes to produce a movie or TV show. As a set designer, it’s Campbell’s job to provide drawings, using a combination of pencil and a computer, so the construction crew can build the sets.

Campbell said what most people don’t realize when watching a film or TV show is that the actors’ surroundings are also a character in the story.

“The surroundings provide beauty, or terror, and believability in the moments of the acted scenes,” Campbell said. “That is the production designer’s job — and everyone working with them in the art department. We create that world.”

Campbell said she has a couple of favorite projects she’s worked on, including Little Women, which was filmed outside of Boston, and Saving Mr. Banks.

For 2019’s Little Women, which stars Emma Watson, Saoirse Ronan and Timothée Chalamet, Campbell worked on the house the sisters lived in. Based in 1868, Little Women tells the story of the four March sisters and is based off the book by Louisa May Alcott.

“We built that house on location. For three months of my life, I lived and breathed that house,” Campbell said. “That was an amazing project to be involved in and the final product looked so great. It was a very good film.”

The house was re-created for the movie after Campbell, and others in the art department, toured Louisa May Alcott’s Orchard House, which is now a museum in Concord, Massachusetts. Campbell said it’s rare that she gets to walk through a reference like that for her work.

“Usually I’m looking at photographs from a book,” she said.

Alcott’s father bought 12 acres of land in 1857 for $945. He then moved a small farmhouse and joined it to the larger house — the man who sold the land thought both houses would have to be torn down, Campbell said.

“Think about that in the 1850s and 1860s,” she said. “There are no power tools. It’s all by hand. I was working with a designer who was open to introducing these strange anomalies that house had, because everything was DIY engineered. That house was so different. It was a phenomenal experience.”

Saving Mr. Banks, which was released in 2013 and stars Emma Thompson and Tom Hanks, tells the story of author P.L. Travers, who reflects on her childhood after reluctantly meeting with Walt Disney, who wants to adopt her book Mary Poppins for the big screen, according to imdb.com.

There was an archivist with them, and Campbell and the art director wore white gloves to protect the artifacts. Campbell drew the furniture and re-created Walt Disney’s office for the movie.

“The result was amazing,” she said.

Campbell added: “You can see how the architecture and theater background play into this. You can’t do this job without having a background in those things.”

She’s filmed on location in Boston and New Orleans several times, along with Georgia, Florida, North Carolina, Utah and Arkansas.

Her dream location is Vancouver.

“It’s fun to go on location. You’re leaving your world behind for months at a time, but the opportunity to get to go live in some other city or town, and not be a tourist, is to me a very valuable experience,” Campbell said.

She said the industry has changed a lot over the years with the additions of streaming services like Netflix, Amazon Prime and Apple TV+. Campbell said those services have brought back storytelling into the world in a way that big studios are not interested in paying for.

She used the film CODA, released by Apple TV+, as an example. CODA is a coming-of-age comedy-drama film about children of deaf adults.

“You’d never have seen that produced by any of the big studios. And that gives me hope,” Campbell said.

She’s interested to see how the industry will evolve in the future, especially since movie theaters were closed during the pandemic and many set designers are now working remotely, and plan to keep doing so in the future.

“I don’t think the art will ever die,” Campbell said. “People will always have stories they want to tell.”