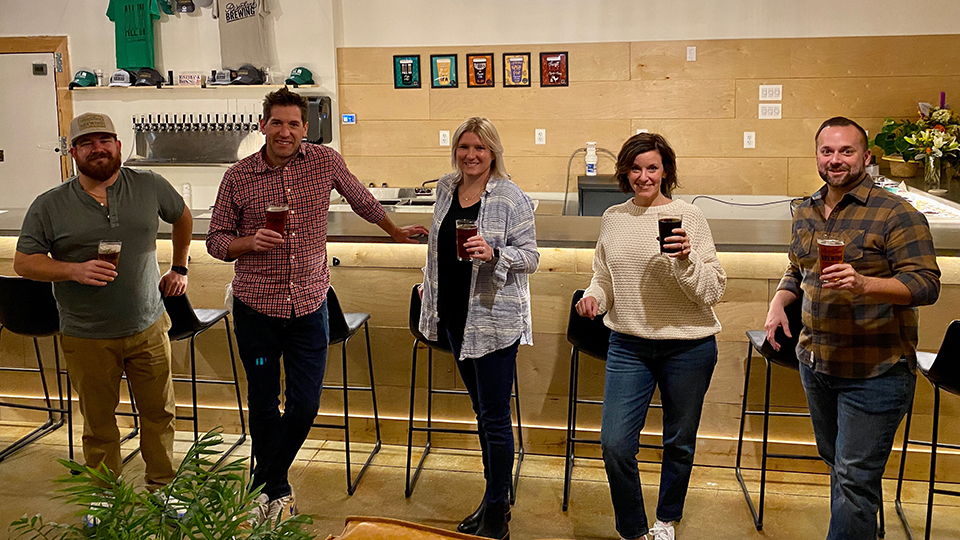 It’s a Saturday night in Council Grove, Kansas, and Riverbank Brewing is a busy place.

Warm, inviting lights twinkle overhead, and you can hear the sounds of conversation and laughter coming from inside the brewery, along with a football game playing on TV. If you’re thirsty, you can order a tall, cold glass of Riverbank’s signature “Waves” wheat beer — or one of the many other uniquely local brews on tap.

It’s the perfect spot for family and friends to gather on the weekend, taking a moment to slow down from the hecticness of life and enjoy a relaxing moment together.

This is exactly the sort of place that Pat Atchity ’07,  Jesse ’08 and Deidre ’11 Knight, and Lindsay and Joshua Gant dreamed of when they first started talking about launching this brewery together. The five friends — three of whom are K-Staters — wanted to celebrate their love of community, craft beer and Council Grove, and Riverbank Brewing does just that.

“It’s consistent, constant work, but it’s not hard — it’s fun,” said Deidre of owning the business. “It’s the people — being able to just watch people enjoy themselves here, whether they’re families or couples or people traveling through town, it’s just so awesome to see people happy and enjoying themselves in our home and this place that we’ve put a lot of work into.”

The story of Riverbank Brewing begins (like many good stories) at Kansas State University.

Pat and Jesse were best friends, fraternity brothers and roommates at K-State, and even worked together at Tubby's Sports Bar. K-State is also where Deidre and Jesse met and fell in love.

The K-Staters stayed in touch after graduating, and also expanded their friend group to include Lindsay and Joshua, the latter of whom grew up in the Council Grove area and had known Jesse for many years.

“All five of us, we were definitely friends before we started any of this operation,” Deidre said. “Friends who liked to drink beer together and liked to visit breweries.”

They all began talking about building a business in 2019 and started small-scale home brewing together.

Deidre and Jesse had previously purchased a building in downtown Council Grove to house another business they own and decided to dedicate half of the space to the brewery project.

“It was a very dilapidated building — and that’s putting it mildly,” Jesse said. “The project of making it what it was to what it is, obviously, was a challenge in itself.”

They started construction in spring 2020, and then the COVID-19 pandemic hit, bringing delays and supply availability issues. Heavy construction began in earnest in fall 2020, and the brewery officially opened its doors in November 2021.

“We all believe that it was honestly a blessing in disguise for our business,” Deidre said. “Because we had to slow down and be a little more methodical about this process, it really helped our business be a lot more healthy than it could have been had we been rushed to open in 2020.”

Although these friends could have opened their brewery anywhere, there was never any doubt that Council Grove was the best place.

Joshua, Lindsay, Deidre and Jesse all moved to Council Grove about a decade ago, and while Pat lives in Kansas City, he also has a fondness for the small town.

During their travels across the country, the friends noticed that the small towns that were thriving had breweries in them. Council Grove is known as a community that loves outdoor recreation and a slower pace of life, and a brewery seemed like the perfect addition.

“We all agree that craft beer lends itself to community and conversation and collaboration,” Deidre said. “A lot of times in breweries and old beer halls, you see large tables with people from all walks of life sitting together, drinking beer together, playing games together. That was the kind of community that we wanted to build here in Council Grove where we live.”

“The support that I see from people in the town is inspiring,” Pat echoes. “The reason why that town has started thriving is because you can tell the people there actually care.”

Jesse adds that Riverbank Brewing doesn’t serve a full menu of food, since there are quite a few dining options already in Council Grove. Guests are encouraged to bring in food to the brewery and shop at other local businesses in town.

“We wanted more of a space to hang out and sit down, and really feel like it was hanging out in someone’s living room,” Jesse said. “We worked pretty hard to create that environment.”

As K-State fans, Pat, Jesse and Deidre are quick to point out Riverbank Brewing’s close proximity to Manhattan (the distance between Riverbank Brewing and Bill Snyder Family Stadium is about 50 miles via KS-177).

Lindsay is a KU grad and Joshua is an Emporia State grad, so naturally there’s some friendly rivalries on game days. When K-State vs. KU games are playing on the TV in the brewery, you can see fans of both schools having some good-natured fun. One of the first beers that the friends brewed for commercial use was an IPA called “House Divided.”

“We like to do fun stuff like that; obviously we're not enemies,” Deidre said. “Because of where Council Grove is in Kansas, there’s a big juxtaposition of people who went to both schools. We like to do things to keep it fun and lighthearted.”

For those who don’t typically like beer, Riverbank Brewing has a custom cocktail menu too — although Jesse does encourage guests to try a sample, and see if they love craft beer after all.

The selection of beers is rotated frequently, so there’s always something new on tap.

For Pat, his favorite is Hoppy Tears: “It’s what I’ve always wanted an IPA to taste like. It’s just perfect.”

Jesse still has a special sense of nostalgia for the first beer they ever brewed called All In; the name symbolizes all of the long hours, hard work, hopes and dreams given to the project.

For these friends, all that hard work feels worth it every time they walk through the doors to their business and see people enjoying the space.

“It’s connecting people — it really is,” Pat said. “My favorite part about it is walking around and talking to all the people.”

Jesse agrees. “For me the coolest part is just seeing the completed project and people inside and outside the community actually enjoying a space that we created.”