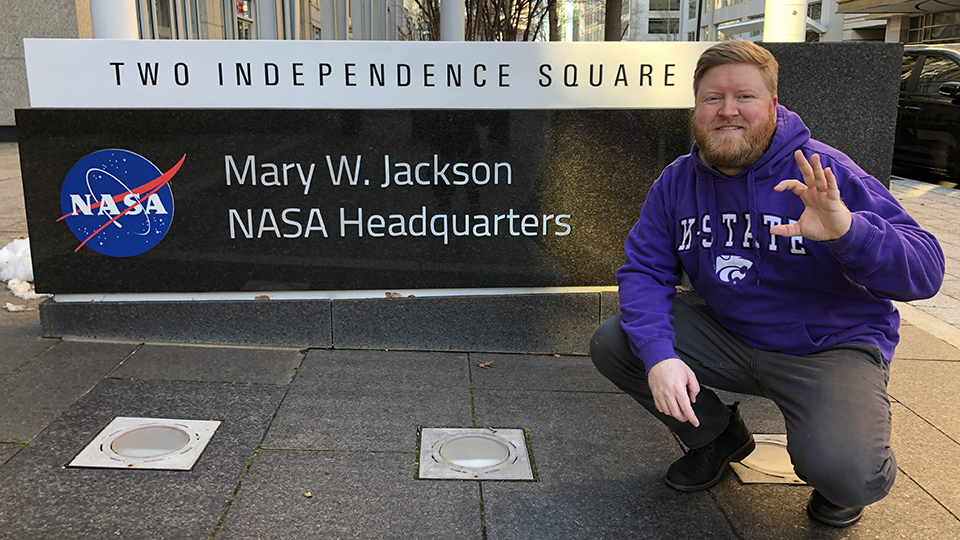 When Shane Apple ’04 first arrived at K-State, he wasn’t sure what he wanted to do when he graduated.

He recalls sitting down in the Seaton Hall computer lab one day and searching all the majors offered at K-State. Broadcast journalism popped up as an option, and he was intrigued. All it took was one semester in TV and radio for him to realize that he’d found his passion.

“The best part of my career is showing things that people don’t get the chance to see,” said Apple, who is currently a contract video producer at NASA. “I’ve had so many fun experiences in my career like interviewing Lou Ferrigno (the original Hulk), running onto the court when Wake Forest upset Duke, riding M1 Abrams tanks, filming on a boat in Hong Kong’s Victoria Harbor, the San Gabriel dam valve releases in Los Angeles County … the places my camera has taken me is astounding.”

Apple’s career journey started in television news at KSNT in Topeka, Kansas, where he served as a part-time video editor and studio camera operator. Although he jokes that this type of entry-level position is “basically as low as you can get in the business besides being an unpaid intern,” he quickly moved up to editing the 5, 6 and 11 o’clock newscasts at WFMY News 2 in Greensboro, North Carolina, where he got the chance to move out into the field to cover stories as a photojournalist, including sports, hurricanes and presidential rallies.

After pivoting to contract work with the Department of Defense at Fort Knox, Kentucky, and later covering stories for Los Angeles County Public Works, he now finds himself as a contract video producer for NASA.

Apple has been working at NASA headquarters for about three months so far and divides his time between editing videos from his home office, brainstorming with other team members about future projects, or filming in a studio at NASA HQ.

“The best part of the job so far is getting a chance to show people the amazing things that NASA is doing on a daily basis,” Apple said. “It’s astounding the things that NASA is accomplishing every week. Most of the time people only see NASA make the news when they launch things into space, but NASA is making huge improvements to our daily lives. Getting a chance to show how much NASA contributes to science is such a great experience.”

“One day I was making changes to the script on the teleprompter while Bob Cabana was standing in front of the camera looking over the changes I made,” Apple recalls. “I kept making mistakes in my typing as he looked on and I commented, ‘No pressure, just Bob Cabana looking over my work,’ to which he replied, ‘You think that’s pressure, you try landing a gliding Space Shuttle where you only have one chance to get it right.’ Turns out it was 31 years to the day when he piloted STS-41 out of orbit to a full stop on the runway at Edwards Air Force Base in California. It’s really amazing to walk down the halls at NASA and see so many people with extensive Wikipedia pages written about them.”

Looking ahead to 2022, Apple is excited to cover the development of the Artemis moon landing program; share discoveries from the Webb Telescope’s exploration of the solar system; and witness the SLS rocket launch from Cape Canaveral — the largest rocket launch since the Apollo program.

“Getting a chance to help be part of history makes me realize how privileged I am to get to tell these stories,” he said. “I can only hope that current and future K-Staters will be as lucky as I am.”

Although storytelling technology and platforms have changed since he graduated from K-State back in 2004, Apple said the principles he learned during his time here still guide him today.

“My experience at K-State gave me the experience that I needed to hit the ground running when I started my career,” he said. “The studio we operate at NASA is not all that different from the studio at Dole Hall. While shooting video around campus to cover stories for Manhattan Matters, I got valuable field experience. It gave me a chance to show things from my own perspective. Professor David McFarland really inspired me to find creative ways to not only tell a story, but to look for stories that no one else was telling. I couldn’t have imagined that I would end up at NASA as a video producer. K-State made that possible for me.”