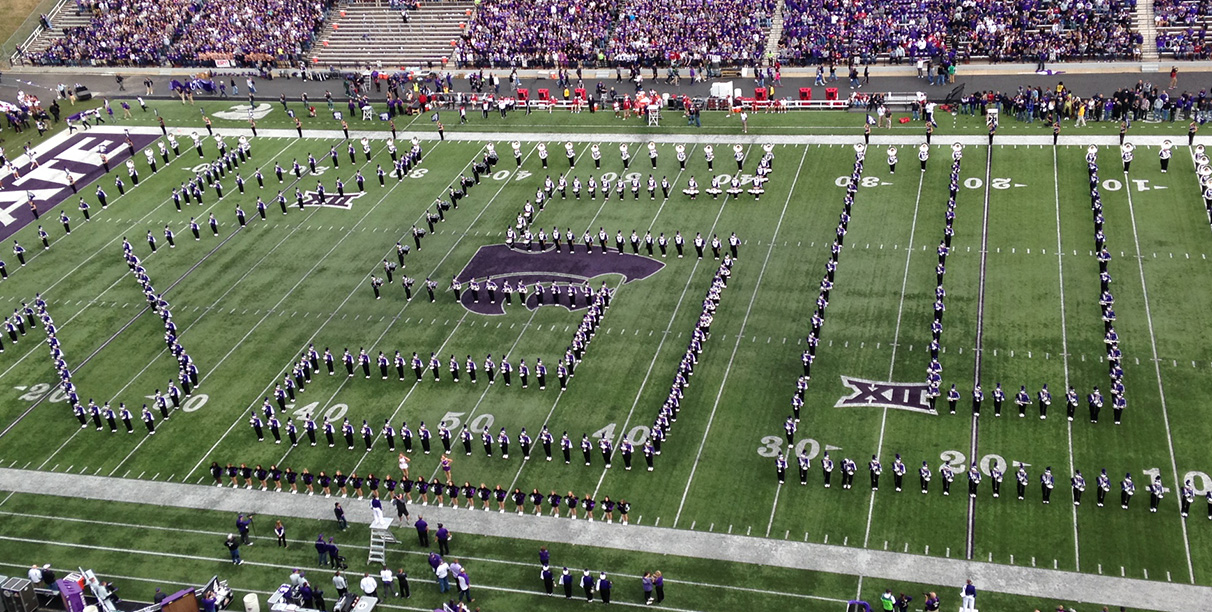 This fall, Kansas State University and the K-State Alumni Association are celebrating the 90th anniversary of the fight song “Wildcat Victory.” Joining the celebration during Homecoming are family members of fight song composer Harry Erickson ’27.

While Erickson died in 1994, the family was contacted this summer for a K-Stater magazine article about the 90th anniversary of the fight song. Through that connection, a Homecoming experience was planned.

Erickson’s wife, Carol; daughter Eryn Durlam; and grandson Noah Durlam, will travel from Wisconsin to participate in Homecoming events. While Harry was the only K-Stater in their family, Carol said the fight song and K-State mean a lot to their family, and they are excited to visit campus to celebrate “Wildcat Victory.”

“It is a great pleasure to have the family of the man who gave us one of the greatest fight songs of all time back ‘home’ with us to celebrate the 90th anniversary of ‘Wildcat Victory!’” K-State’s director of bands Frank Tracz said.

Harry Erickson wrote the fight song in the spring of 1927 as the student director for the Men’s Glee Club. By the fall football season, the student body was asked to memorize the song for Homecoming activities.

The fight song originally featured two verses. It is the second verse “Fight, you K-State Wildcats” that fans know and love today. The K-State Marching Band plans to re-awaken the first verse “Hail to the purple” during the Homecoming pregame performance.

“We haven’t played it ever,” Tracz said. “Nobody knows it — it’s got little snippets of the main theme in there that they’ll recognize. We are very excited to play the first verse ‘Hail to the Purple’ for the very first time in Bill Snyder Family Stadium followed by the part we all know and love.”

This year’s Homecoming theme is Purple Pride Worldwide. The week marks K-State’s 102nd Homecoming celebration. Homecoming is a universitywide celebration coordinated by the K-State Alumni Association and sponsored by AT&T.

See a full schedule of Homecoming events and learn more about this year's celebration at www.K-State.com/Homecoming.

Watch the Alumni Association’s video tribute to the fight song.

Hail to the purple!
Hail to the white!
Wildcat in spirit,
Wildcat in fight.
Hail! Alma Mater,
From sea to sea.
Onward forever!
Hail victory!

Fight, you Aggie Wildcat!
For Alma Mater — fight!
Glory in the combat
For the purple and the white
Faithful to our colors
We will ever be.
Fighting, ever fighting
For a Wildcat Victory.